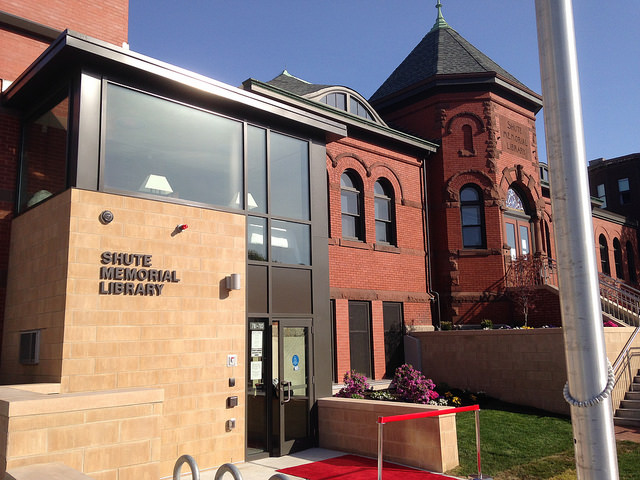 • In construction news, the renovated Shute Memorial Library (shown above) was rededicated on May 7, and the Boston Public Library's central branch in Copley Square held its ribbon cutting celebration on February 21 (shown below.) A groundbreaking ceremony for the Reading Public Library's new building was held on February 6. 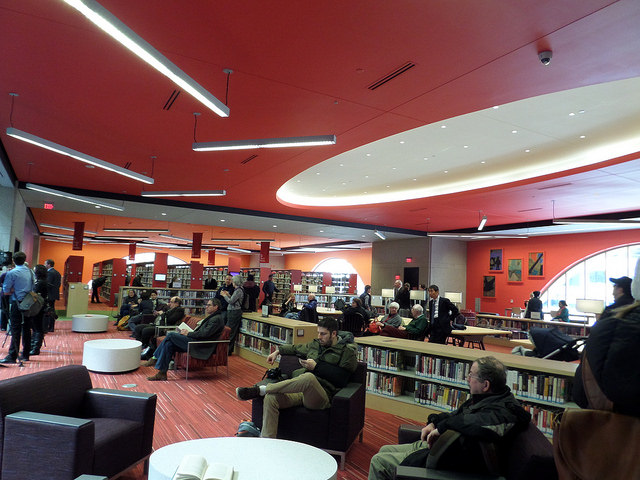 The BPL's renovated Johnson Building was packed from Day 1.

• The State Aid Review Committee, which held its first meeting in December 2014, has been working to assess the role of the State Aid to Public Libraries program in improving library services throughout the Commonwealth.

• Libraries throughout Massachusetts made the eighth annual Boston Bruins/Cradles to Crayons pajama drive an enormous success. They represented 58 of the 93 participating organizations and collected more than 3,100 of the 6,100 total pairs of pajamas, as well as $3,400 of the $8,200 in financial donations.

• Commissioners and staff met with legislators, stakeholders, and constituents throughout the state to discuss the need for increased library funding at a series of legislative breakfasts held in the winter and the spring.

• The new Small Libraries in Networks - New Participants grant, approved at the January board meeting of the MBLC, was created to help small libraries pay for membership costs in automated networks.

The 125th anniversary of the Massachusetts Board of Library Commissioners fell on October 30. After the regular monthly board meeting on November 5, a special reception was held at the Massachusetts State House. As a part of the celebration, five awards in honor of the five original commissioners will be given to past commissioners, state legislators, and other outstanding allies and advocates of the Commonwealth's public libraries.