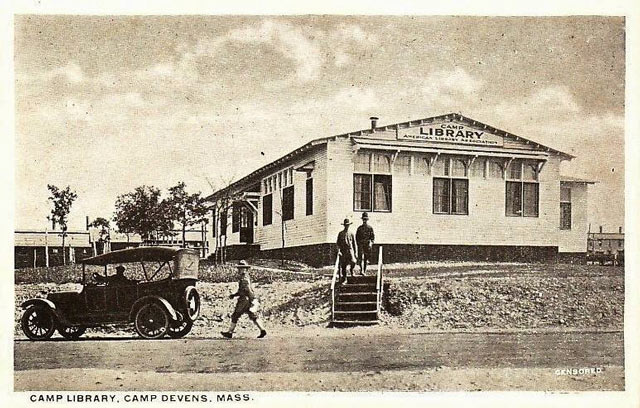 Camp Library, Camp Devens, Massachusetts1
By June of 1918, library buildings had been erected at 36 camps and work was underway at another three. At Camp Devens, a building originally used as a chapel was turned over to the American Library Association for use as a hospital branch library.2

TODAY: Massachusetts libraries lend materials in all formats and languages, meeting the personal, recreational, and professional needs of patrons throughout the Commonwealth.
In 1918: The Massachusetts Free Library Commission had about 130 sets of picture postcards of present-day France, accompanied by illustrated pamphlets on the country and the then-contested territory of Alsace-Lorraine. These sets were provided by the French government to the Children's Museum in Jamaica Plain, which in turn offered them to the Commission for distribution to Massachusetts libraries upon request.3