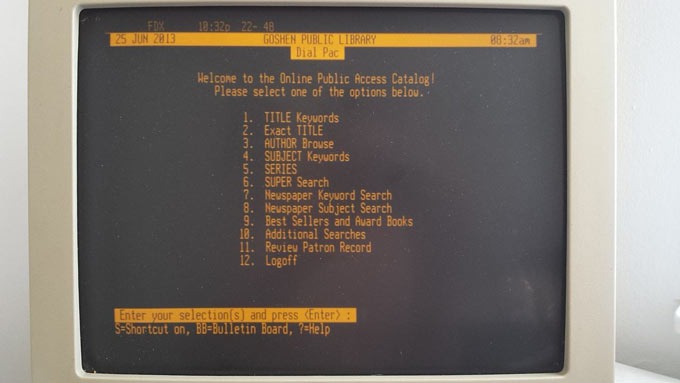 A Wyse WY-60 serial terminal connected to the Dynix Automated Library System via Telnet. Dynix was by far and away the most popular program of its type during the late 1980s and early 1990s; it merged with the Sirsi corporation in 2005 to create SirsiDynix. The company's software is still used in over 20,000 libraries today.1

"[It will] allow us to circulate materials via an automated system, have rapid access to the collection of other NOBLE libraries, and make our holdings available 'online' within NOBLE and other cooperative networks in Eastern Massachusetts," the year's annual report states.

The undertaking was a "formidable task," requiring an inventory of all material, bar code labeling for each item, and data entry of holding records for the NOBLE database. All the while, the collection remained popular and well-used, reporting circulation statistics that remained constant over the past two years "despite a reduction in the size of the library collection by over 40%."1