West Warren Library Rises from Ashes
"The West Warren Library reopened Saturday, June 14th with a day of family fun and activities for all. On December 28, 2002, the Library burned to the ground and all its contents were lost... During the past five months, the Board of Trustees has worked tirelessly to reopen the library.

"Following the ribbon cutting, tours were given to explain the various areas and programs that will be held at the library. A Harry Potter look-a-like contest, patriotic bike parade and Shriner clowns helped with fun for all. Also, every child who came to the opening was given a free book."2 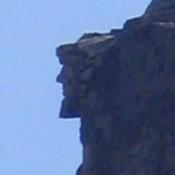 • May 3: The Old Man of the Mountain, also known as the Great Stone Face or the Profile, collapsed. A series of five granite cliff ledges on Cannon Mountain in the White Mountains of New Hampshire, it appeared to form the jagged profile of a face when viewed from the north... The profile has been New Hampshire's state emblem since 1945. It was put on the state's license plate, state route signs, and on the back of New Hampshire's Statehood Quarter. The site is located in the town of Franconia, NH.4