"The only treasure house open to all is a library; the only wealth which will not decay is knowledge. It is the birthright of every citizen of this Commonwealth to share these treasures and possess this wealth." [Annual Report, 1904, p.60]1 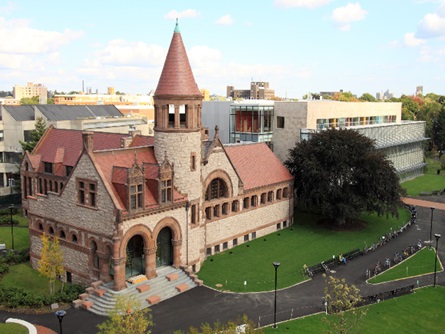 The restored historic library, as seen from the Cambridge Rindge and Latin School roof, now home to the computer commons, reading room, teen room, and more.2


Reciprocal borrowing:
In 1903, the Cambridge Public Library arranged to send books to schools by express. "The library is fortunate in having among its nearest neighbors, four large schools, the pupils of which make direct use of the library, and the volume of the school work is in consequence greater than the statistics of circulation show."1

In January of 1903, the Medford Public Library began "renting" books from the Bodley Club Library for a yearly rental fee of $150. For that fee, the library had "use of 1,500 books of recent publication." The Trustees argued that "the same amount of money would scarcely purchase 140 books."1

TODAY: Libraries still take advantage of these lease agreements with companies like McNaughton Subscriptions and Baker & Taylor as a way to supplement popular collections.

Also in 1903, the Hon. Henry Stedman Nourse, a commissioner who had been on the Board since its inception in addition to representing Lancaster in the state legislature, passed away in November. In his 13 years on the Board, "the Commission... held more than a hundred and fifty meetings, and though further removed by time and distance than any of his associates, his seat was vacated for the first time by his death."1