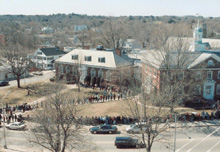 The line of library patrons stretched for several miles as part of the Reading Public Library's 20th Anniversary celebrations.1


Reading Breaks a World Record
"On Saturday, March 13, 2004, the Reading Public Library and more than 2,000 supporters broke the Guinness Book of World Records record for the 'longest human conveyor belt' by passing a book on the history of Reading (At Wood End). The participants were celebrating the 20th anniversary of the library's move from an old Carnegie building to its current location.

Twenty years ago, the move was done in large part by a human chain, and the library won the John Cotton Dana Library Public Relations Award for the accomplishment. MBLC Commissioner Elia Marnik and State Representatives Brad Jones (R-North Reading) and Carol Donovan (D-Woburn) were among the dignitaries lining the route."1