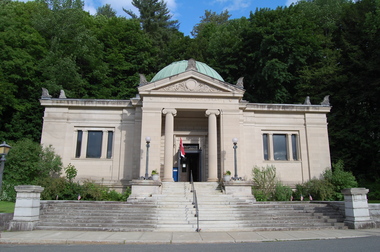 
Library construction:
Massachusetts has a long-standing tradition of generous supporters who fund building projects in cities and towns across the Commonwealth. In 1900, the Field Memorial Library was "incorporated by the Legislature for the purpose of administering the gift of Mr. Marshall Field." Mr. Field was the founder of the Chicago-based department stores Marshall Field and Company; the chain was acquired by Macy's in 2005.

The Field Memorial Library still serves as the public library in Conway and as a tribute to Mr. Field's parents, John and Fidelia Nash Field.[1][2]

Library legislation:
Chapter 233 of the Acts of 1900 authorized "the board of free public library commissioners to purchase books for free public libraries of certain towns." The Act was approved April 13, 1900 and stated:

"The board of free public library commissioners may expend, in such amounts and at times they deem expedient, a sum not exceeding one hundred dollars, for the purchase of books for every free public library owned and controlled by a town the valuation of which does not exceed six hundred thousand dollars: provided, that the town shall have complied with all laws relative to the maintenance of such library…" [Acts of 1900, chapter 233]2