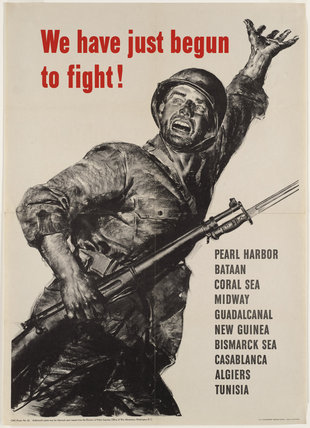 
The Office of War Information continued to rely on librarians' assistance in 1943:

"...the cooperation of all libraries [is requested] in bringing information necessary to the HOME FRONT to the public. Libraries are in a strategic position to advertise and circulate materials which will develop understanding in such fields as: consumer education and conservation, inflation, scrap collecting, victory gardening, wartime needs of children of working mothers, public health and civilization defense (i.e., air raids and first aid.)1

Discounts from book publishers:
In May 1943, the legislative committee of the Massachusetts Library Association was successful in securing an amendment to the Fair Trade Act which, as it was originally written, permitted book publishers to limit discounts to public libraries. The amendment as passed exempts "public libraries from restricted discounts on book purchases."1

Library patriotism:
Libraries were urged to participate in "I Am an American Day" on May 16, 1943, an impromptu holiday declared by President Roosevelt. They worked to arrange exhibits and prepare bibliographies for local programs throughout the state and country.1