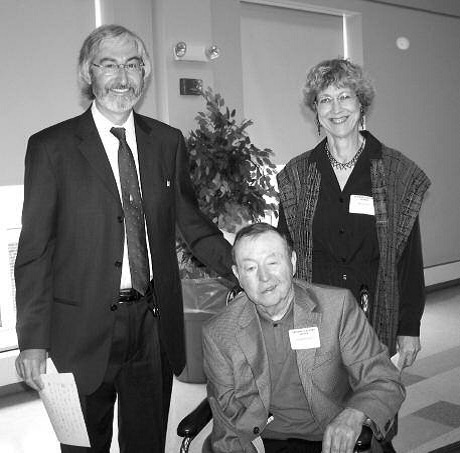 The following appeared in the May/June 2006 issue of MBLC Notes.

MBLC Commissioner Joseph Hopkins of Amherst was inducted into the Massachusetts Library Association (MLA) Hall of Fame during the organization's annual conference on May 8, 2006. This honor is bestowed upon practicing or retired librarians who have made a substantial, sustained contribution to advancing the cause of Massachusetts librarians or librarianship over a career of at least 10 years.

Former Chair of the Massachusetts Board of Library Commissioners, Hopkins was first appointed to the Board by Governor Paul Cellucci in 1998 and reappointed by Governor Mitt Romney in 2003. A former librarian, Hopkins retired as head librarian of the Worcester Free Public Library in 1991 after 21 years. He was also the director of the Watertown Public Library and the Meadville Public Library in Pennsylvania. In addition to his work with the MBLC, he has also served as president of MLA, and trustee and president of the board of library trustees for the Saline District Library in Michigan.

"Joe has demonstrated strong leadership in advocating for library automation, library funding, intellectual freedom issues, and library legislation," [said] Maureen Killoran, head of public library advisory unit/government liaison of the MBLC. "He has been a mentor to librarians throughout Massachusetts, and his strong interest in and commitment to libraries remains, even 14 years after his retirement."

Two others, Christine Kardokas of Worcester (former associate head of the Worcester Public Library) [and] Anne O'Brien of Harwich (former library director of the Pollard Memorial Library in Lowell and Snow Library in Orleans), were also inducted.