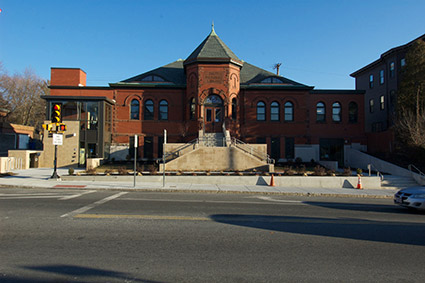 
Library reports from around the state:
In 1905, the Bolton Public Library, in its new building, completed the catalogs of its collection and classified the volumes using the Dewey system. "An improved system of book charging has been introduced," the annual report stated.2

Meanwhile, the Shute Memorial Library in Everett (pictured above) reported that "nearly every day the children’s corner is filled to overflowing, and many of the little people are obliged to stand, owing to the lack of room for more chairs."2 Recently, the renovated Shute Library opened its doors to the public, complete with an expanded children’s room.

And in Fall River, staff noticed that the work of the library was greatly increased in all its departments during the stoppage of the mills.2 Libraries today continue to see an increase in usage when there is an economic downturn.

Interlibrary loan & delivery:
Interlibrary loan began to take off in Massachusetts as well, at first so that small libraries in the state could access the 8,000 volumes of the ALA's specially curated catalog: "All of these books are available to your readers through inter-library loan, under the condition that you pay transportation both ways… This does not apply to fiction, which will not be sent unless there is some extraordinary reason why it should be."2
TODAY: Libraries in the Commonwealth share their books via the statewide delivery system, fiction included, for both ordinary and extraordinary reasons.