The Act of Consolidation of State Departments (Chapter 350 of the Acts of 1919) moved the Board of Free Public Library Commissioners within the Department of Education. The DOE was one of 16 new consolidated state government departments created at this time.

The new department changed the Commission's name to the "Division of Public Libraries," but did not alter its purpose or goals. Although the Commission had worked with schools since its foundation, this consolidation brought school and public libraries into a more clearly defined relationship.1 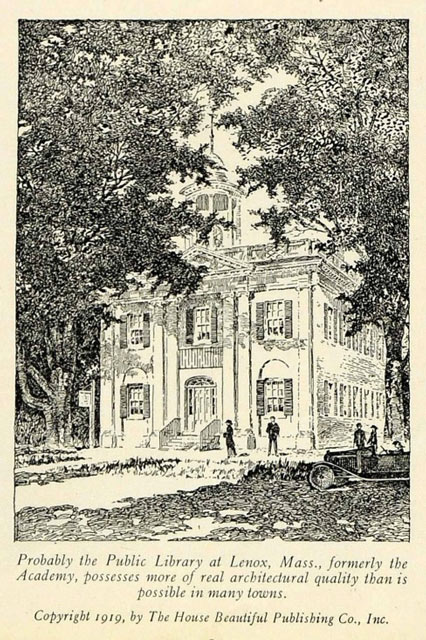 1919 rendering of the Lenox Public Library from House Beautiful magazine.2
A beautiful example of Greek Revival architecture, the public library of Lenox, Massachusetts moved into the former Berkshire County Courthouse in 1874. For a time starting in the 1890s, the building also housed the town's only doctor, their telephone switchboard, and fire alarm system.3

References:
1. "The Board of Library Commissioners: Its Historic and Statutory Powers and Its Relationship to the Department of Education" by Charles Joyce, Director of the Bureau of Library Extension (Oct. 10, 1974).
(See also "History, Structure and Government of Public Libraries in Massachusetts" by V. Genevieve Galick, Bay State Librarian, July 1964.)
2. librarypostcards.blogspot.com [link].
3. lenoxlib.org [link].
4. www.timelines.ws [link].
5. www.timelines.ws [link].