As we gathered facts for this site, we learned that many of the priorities and policies of the MBLC have a history as lengthy as that of the Commission itself.

TODAY: Equal access is a priority.
In 1892: "The population of Massachusetts, according to the United States census of 1890, was 2,238,943, and sixty-six towns which still have no free public library contained a population of 92,439, so that about four and one-eighth per cent of our people are without this blessing. Most of these towns are declining in population and valuation, and sorely need the aid which the free library law was designed to confer."1

TODAY: Local match and support for construction projects is necessary.
In 1892: "The policy of the commission has been to establish libraries only so fast as the towns were fully convinced of the wisdom of such action and as the people demanded the additional educational advantages which a free public library can alone supply.  It is believed that every library thus far established under the new law rests upon this firm foundation; that the future growth and usefulness of these libraries are assured by the welcome they have received from all classes of citizens."1

TODAY: Libraries use collaborative purchasing power to get better pricing on books.
In 1892: "Much time and effort have been given to securing at the lowest prices the books supplied. In some instances the public spirit of publishers has been appealed to, with generous result. The commission has paid from its contingent fund the cost of labeling, packing and transporting all the books supplied, so that the gifts of the State have been delivered to the towns free of all expense."1 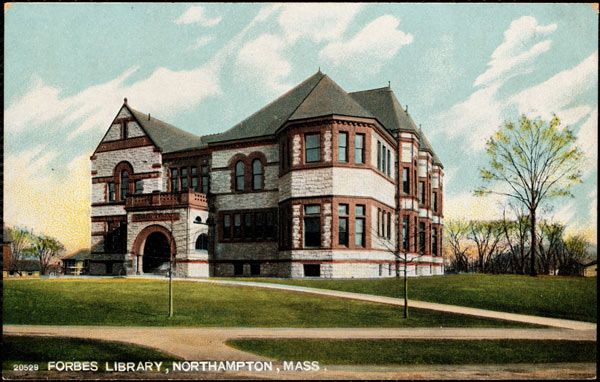 (Image from Digital Commonwealth collections)
According to the 1892 Free Public Library Report, "Construction was started on the Forbes Library Building at Northampton, which is set to cost about $100,000."