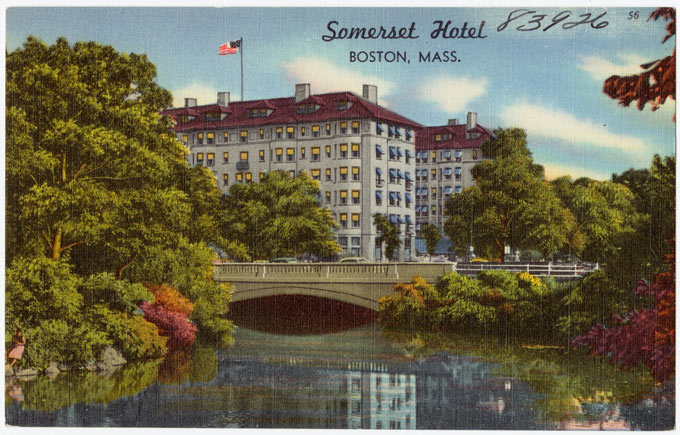 Once located on Commonwealth Avenue in Boston's Back Bay, the famous Somerset luxury hotel was the meeting place for discriminating Bostonians in its heyday.1


On April 29, 1965, the Division celebrated its 75th anniversary celebration as the first state library extension agency in the country. The official birthday dinner was held at the Louis XIV Ballroom of the Somerset Hotel. Governor Volpe, Commissioner Kiernan, and Congressman Conte were among those at the head table, along with professional colleagues - Jean L. Connor, Director of the New York State Division of Library Extension; Mr. John G. Lorenz, Director of the Division of Library Extension, U.S. Office of Education; and Mr. Kenneth R. Shaffer, Director of the School of Library Science at Simmons College.1

Today, the Somerset Hotel has been replaced with luxury condominiums, but the MBLC will find another comparably grand location for its 125th anniversary celebration on October 30, 2015.