Maier Named Director
Following a nationwide search, Robert Maier, MBLC Deputy Director and Head of Library Development, was unanimously appointed as the new director of the Board by the Commissioners on Thursday, October 3, 2002, during their regularly scheduled Board meeting. 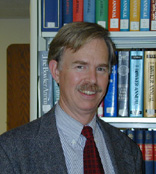 
"It is with great pleasure to be able to announce the appointment of Robert Maier as our new director," MBLC Chairman Joseph Hopkins said. "Our Search Committee did an excellent job of screening candidates, and Mr. Maier’s experience and in-depth knowledge of the library community within Massachusetts made him our unanimous choice."

A graduate of Union College in Schenectady, New York, Maier earned his MLS from the University of Rhode Island Graduate Library School. Prior to his work with the Board, Maier was the director of the Bedford Free Public Library in Massachusetts; he also worked as a librarian in the Cranston (Rhode Island) Public Library System.2