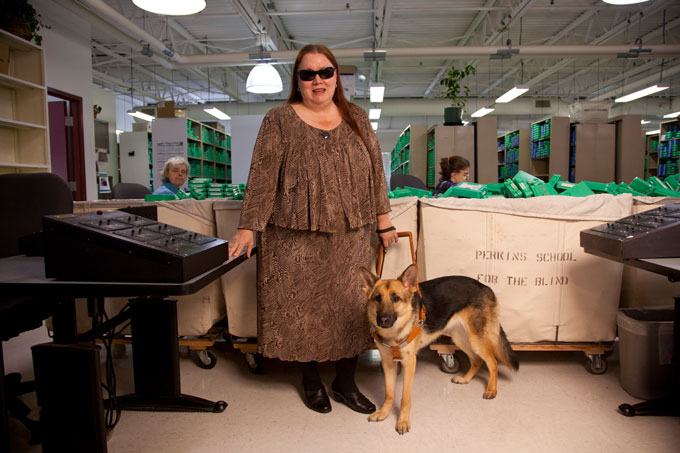 Kim Charlson and her guide dog.
(Image from Interface, newsletter of the Association of Specialized and Cooperative Library Agencies)


The following appeared in the July/August 2007 issue of MBLC Notes.

The Massachusetts Board of Library Commissioners (MBLC) is pleased to announce that the Perkins School for the Blind has once again been selected as the Commonwealth's vendor under contract with the MBLC to provide the services of the Braille & Talking Book Library program in Massachusetts.

Through its collaboration with the Library of Congress program, the Perkins Library provides audio and braille books, magazines, and playback equipment on free loan to individuals having visual, physical, or reading disabilities making it difficult to read conventional printed materials. Institutions serving this population are also eligible for services.

"In today's world, accessibility must extend beyond wheelchair ramps and braille elevator buttons. Access to information is equally important. I'm delighted that Massachusetts has the demonstrated commitment, combined with the leadership and innovation exemplified by Library Director Kim Charlson and her talented team at the Perkins Library, in providing public funding for accessible library services so that thousands of people across our state who can’t read traditional print have access to reading and can keep up with current events," [said] Perkins President Steven M. Rothstein.

In operation for over 178 years, Perkins was the first school for the blind in the country, where Helen Keller and her teacher, Annie Sullivan, were educated. Today, Perkins serves 87,000 people who are blind or visually impaired with multiple disabilities - from babies to school-age children to elders - here and in 60 countries around the world. Perkins Braille & Talking Book Library provides books on tape and in braille to 20,000 people who can’t read traditional type due to a visual, physical or learning disability.