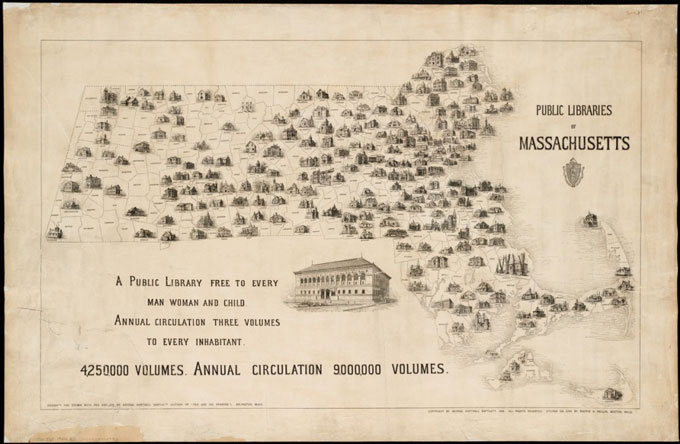 The public libraries of Massachusetts, designed and drawn with pen and ink by George Hartnell Bartlett (ca. 1904, update of the 1893 version).1

Update of 1893 "library population" map (pictured above):
The 1904 version, updated by original artist George Bartlett, was shown at the Louisiana Purchase Exposition and "attracted great attention at the continuance of the fair at St. Louis" where it was awarded the grand prize.2 In just eleven years, the annual circulation numbers climbed from approximately 5 million volumes to 9 million.

Boston Public Library branches and outlets:
As of 1904, the Boston Public Library had "ten branch libraries, with permanent collections of books; 22 delivery stations, of which 13 are reading rooms; and 153 places of deposit or delivery at city institutions, engine houses and public and parochial schools; making a total of 185 agencies outside of the central library."2
TODAY: In addition to the Central Library in Copley Square, the Boston Public Library has 24 neighborhood branch locations around the city and provides services as the Library for the Commonwealth throughout Massachusetts, supporting its mission: "Free to All."3

Summer reading programs in libraries:
In the summer of 1904, the Northampton Public Library "arranged a course of vacation reading for children by setting aside 80 titles, any eight of which, not previously read, could be taken out during the months of July and August… The children who entered the course were registered, and were credited with the books as they were read…The children were presented with certificates on the completion of their courses. The experiment was very successful."2
TODAY: Approximately 370,000 children, teens, and adults participate in the statewide summer reading program.