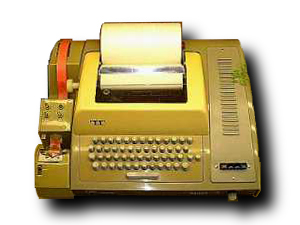 
In 1967: The Bureau of Library Extension inaugurated private-line teletype service (PLTT) between the headquarter libraries of the three state-financed Regional Public Library systems.

"With PLTT, a North Adams businessman can expect his local library to supply the information he must have in less than twenty-four hours. This will be possible with PLTT, even though his request has been transferred by telephone via the Berkshire Athenaeum in Pittsfield to the Forbes Library in Northampton to the System Headquarters at Springfield and on to a subject specialist and the special resources of the Boston Public Library."2

TODAY: Most interlibrary loan requests are communicated via the Internet, either directly from system to system or by email.