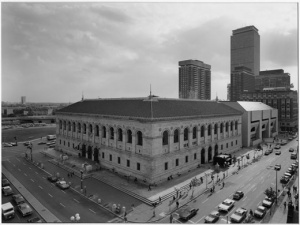 Shot of the Boston Public Library in 1974. The unfinished Prudential Center stands in the background.
(Image from The Guardian)


In May 1974, non-supervisory employees of public libraries were brought under coverage of the minimum wage and overtime provisions of the Fair Labor Standards Amendments of 1974. Minimum wage in 1974 was $1.90 an hour.

As of September 1, 1974, 120 public libraries in 117 communities throughout the Commonwealth provided free borrowing privileges to all Massachusetts residents.