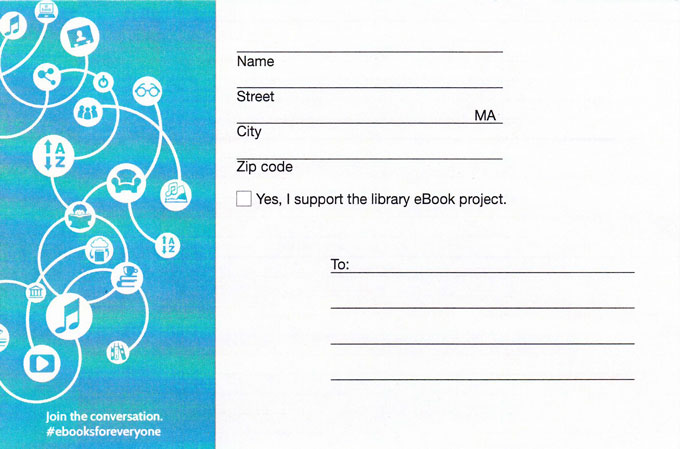 The MA eBook Project started in November 2013. To coincide with the MBLC's FY 2015 legislative agenda, librarians and patrons throughout the Commonwealth filled out these postcards to voice their support for eBooks in libraries.

Rob Maier Retires
Robert Maier, Director of the Massachusetts Board of Library Commissioners (MBLC), retired in March 2013. In a career that spanned more than 40 years, Maier's work was instrumental in moving libraries forward and shaping the access and services available to Massachusetts residents through the Commonwealth's libraries.

Throughout his career, Maier learned valuable lessons and experiences that he brought to bear during his decade as director of the MBLC. His first job was as a reference librarian and later branch librarian at the Cranston (Rhode Island) Public Library System, which was working to bring six formerly independent public libraries together. As director of the Bedford Public Library in Massachusetts, Maier capitalized on the opportunity to improve library service through automation. He worked with other area librarians, trustees, and town officials to develop what became the Minuteman Library Network.

Maier came to the MBLC as head of library development in 1991. In 2000, Maier was designated deputy director in addition to his current position. Two years later, Maier was named interim director. Under Maier's direction, the MBLC strengthened the State Aid to Public Libraries program by finding ways to keep it relevant as a force for public library development in a constrained fiscal environment. Support for regional library systems was maintained. State-funded online database offerings were expanded and a sophisticated website and a consumer web portal were created.