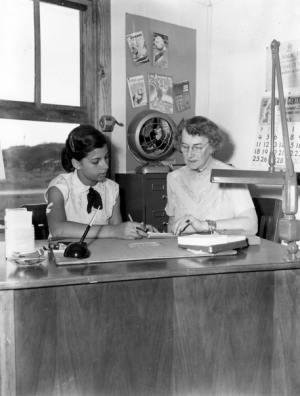 Essae Culver (seated right) was the ALA President in 1941.1


From June 19th to 25th, 1941, Boston hosted the American Library Association's national conference. Over 4,200 libraries from across the country came to Boston to meet and exchange ideas. In his welcome letter, Massachusetts Library Association President Francis H. Henshaw said:

"We in New England have often been accused of insularity. We look to you, our guests from every other section of our great country for an exchange of ideas. New methods developed in California's sun will surely not wither if exposed to New England’s sterner air. A new service that has provided itself in Minnesota will be welcomed in Massachusetts."

The dangers of war hung over everything that was done in 1941, but many acknowledged how important libraries were in the protection of democracy as well as the threats they faced. In the January 1941 edition of the MLA bulletin, the front page reads:

"Yesterday an invader removed from the libraries of Paris those books unfriendly to his cause. Yesterday a visitor saw ...'the fire blackened ruins in London's ancient 'City,' where he was told 3,000,000 books had been burned."

ALA President Essae M. Culver said, "Because these days are so critical, and because the unique services of the libraries of the United States are so adaptable to the needs of our country in its defense program, I have been particularly impressed with the opportunities that are ours."